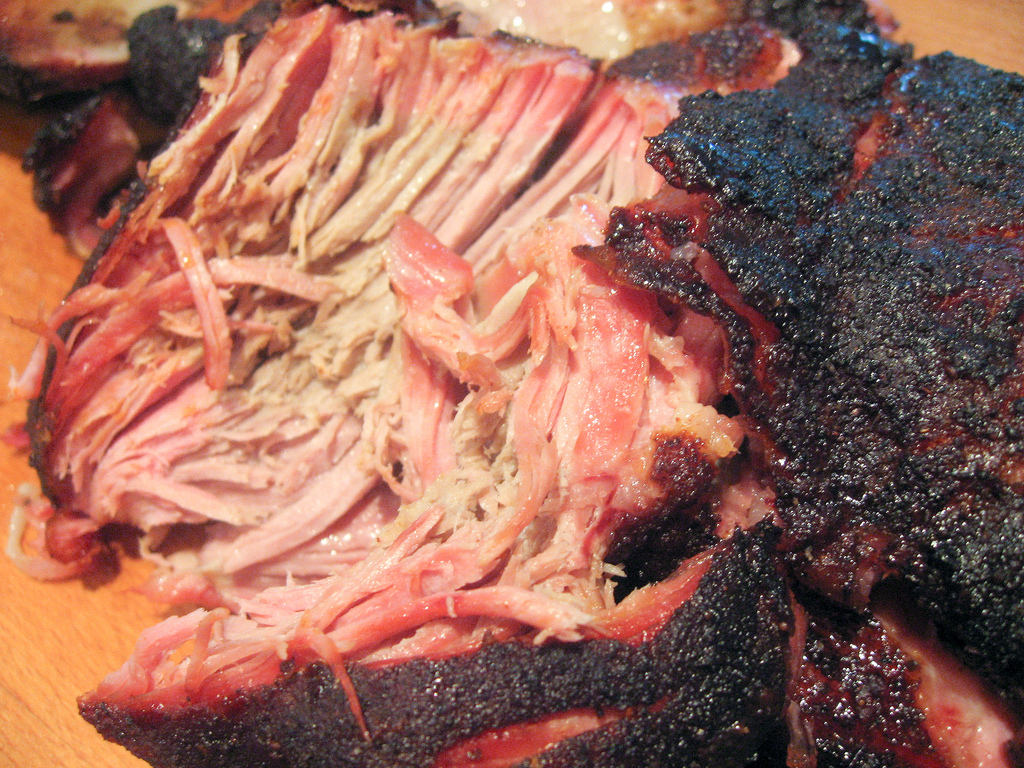 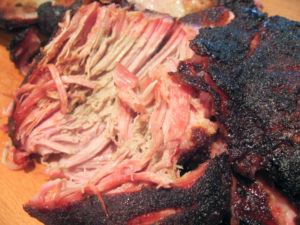 It’s long been known that if you’re looking for real barbecue — that is, meat that’s spent hours cooking low and slow over real wood smoke — the hallmark is the smoke ring. That bright red or pink ring just under the crust or skin of the meat, ranging in depth from a millimeter (about .04 inch) to several centimeters (an inch or more). Though perhaps too much emphasis is given to the smoke ring, it is an appetizing visual indicator that food was prepared skillfully.

How is the smoke ring formed?

The smoke ring is caused by a chemical reaction between the nitrogen dioxide in the wood smoke and the myoglobin in meat. Myoglobin is a substance found in muscle. It’s a spherical protein with an iron-centered group attached. What’s bound to the iron atom determines the meat’s color:

So what does all this talk of myoglobin have to do with the smoke ring—and killer barbecue? When you burn wood, it creates a gas known as nitrogen dioxide. The gas dissolves on the wet meat surface, producing nitric oxides that binds with the myoglobin, and prevents it from becoming metmyoglobin.  What is produced instead is nitric oxide myoglobin (bright red) and/or nitric oxide metmyoglobin (pink). These are the colors of a smoke ring.

Use fuel with more nitrogen

The fuel you choose to cook with determines the amount of NO that can be produced. The more nitrogen in your fuel, the more nitric oxide there will be to create the smoke ring. Dr. Greg Blonder, a professor of design and product engineering at Boston University and frequent contributor to Amazingribs.com, has done considerable research in this field. According to Blonder, wood bark has more nitrogen than either sapwood (the newer, outer part of a stem or branch) or the heartwood (the inner portion), and charcoal briquettes contain even more. (3)
Never allow your wood pellets to get wet, as this will cause them to swell and smolder rather than burn. You need combustion from fire to get the NO molecules you want, so make sure your pellets are burning dry.

Go Low and slow not hot and fast

You have to keep the temperatures low…start extra low and slow…. The smoke ring forms before the meat surface reaches a temperature that would denature the myoglobin. Since smoking will cook your meat with gentle temperatures, this reaction will have more time to take place before the myoglobin is lost. Although charcoal and gas are commonly used when grilling, you wouldn’t see a smoke ring in grilled meats because the temperatures in that application are so high that this reaction doesn’t have time to take place. Generally, when your meat tops 145 degrees, bark forms and that chemical reaction ends.

In order for NO and CO to interact with myoglobin, they must dissolve into surface moisture on the meat. Spraying the meat occasionally with water is a great way to keep the surface moist. Just don’t spray too early or you’ll wash the rub off the meat—wait for the crust to setup on the meat before spritzing.

Now I would never suggest your trim all the fat, because it helps with moisture retention. The thinner you trim the fat the more smoke ring formation you will get. Fat is permeable and you can get a smoke ring under the fat cap, but you have to keep it very thin, like under 1/4 of an inch.

Curing salt contains a close relative of nitric oxide, sodium nitrite. When sodium nitrite comes in contact with meat, it “fixes” the red color in the myoglobin, and voila: meat is pink instead of gray. This proves that you don’t actually need smoke to make a smoke ring; you just need to coat meat in curing salt and let it cook low and slow in a regular oven.

So, coating meat with a salt tenderizer like Morton’s Tender Quick will load up the meat surface with nitrogen dioxide and give you a great smoke ring. Because of the prevalence of this kind of cheating, smoke rings are no longer taken into consideration in barbecue competitions.